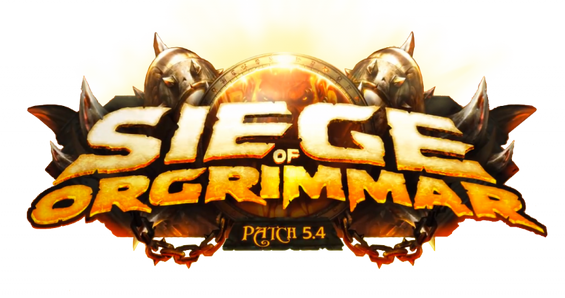 This page tells about part of Leugim and the Grey Legion's actions in the events of the Siege of Orgrimmar.

With the heroes of the Alliance and the Darkspear Rebellion advancing deeper to Garrosh's lair, the Darkspear Vanguard and other Alliance forces aid in fending off the waves of Kor'kron coming from the Underhold. Leugim, who was helping the Vanguard and their allies at the place, eventually overheard scouts of the Darkspear and the Alliance speaking to each other, the corpse secretly followed them to a separate, dark corner at the underground complex and eavesdropped at the two as they exchanged informations about their findings, among them was a discovery of an office belonging to an engineer of the Blackfuse Company that had copies of the mercenary goblin organization's war golems. Having seen the might of such creations, Leugim left the Underhold and sneaked past by the chaotic battle ensuing at the surface of Orgrimmar, returning to Tor'kren Farm.

Upon arriving at the farm, Santangelo, having risen back to Overseer rank, started scheming his next move, a Legion operation to help raiding the Underhold and ransack such schemings so that the guild's engineers can study them and provide a powerful arsenal of their own.

In the following day, Leugim returned to the Underhold and picked up his communicator to call for the Grey Legion, which answered in the form of Legionary Elite Bopalan the goblin mage, Legionary Nethaniyel the Forsaken warlock, Soldier Ai'ga the mok'nathal hunter and Grand Commander Lance Topsail himself. Following the frequency of Leugim's communicator, the Legion group eventually met with the Overseer. Leugim remarked the Grand Commander's absence in the last days and how he came from a different direction than the rest of the summoned people, which Topsail unceremoniously answered by stating that he got lost in the huge underground complex for days before finding his way back. After briefing the Grey Legion of the situation and his plans, and gaining the tacit approval of the Grand Commander, the corpse guided them to the tunnel where the two scouts said that would lead to the engineer's office.

Although initially dominated by the rebels and the Alliance, they faced an unpleasant surprise when they saw the ground of the corridor littered with corpses of both forces and Kor'kron, with only five loyalists,three grunt and two shooters, standing and ready to kill them. During the battle, the Legion was surprised at the sudden arrival of Sahla Graceleaf and her subsequent failed attempt to ambush a grunt, who proceeded to slam her against the wall in retaliation, a shot in the orc's neck from Lance rapidly relieved the pandaren, allowing her to overcome the shooter near her. After rapidly dispatching the five grunts, the Legion, now accompanied by Sahla, ran deeper into the tunnel, passing by more corpses of all sides of the battle until they finally reached the final corridor that led into the engineer's office. However, the ceiling suddenly shattered, Dark Shaman Grazela fell from it, rapidly attacking the Grey Legion with her mace in hands. After a long battle, Grazela also fell, the freed spirits of fire cauterizing the Legion's wounds before dispersing, free from her grasp like the others.

The Legion made their way to the office, but its iron door suddenly closed shut and a security Blackfuse troop appeared from the same hole as Grazela did. The goblins proved to be more powerful than they seemed, one of them even managed to mortally wound Lance by firing an explosive shell at his chest armor, while another knocked Nethaniyel motionless with a Light-bullet headshot. However, despite the high damage they generally inflicted, the security eventually fell and thick smoke emerged from the office room as its door opened. From within it, the engineer Creuza Scumboom stomped a red button close to the left side of the entrance, triggering an explosive trap that hurled Ai'ga off the corridor's carvenous cliff. After a brief fight on foot against the Legion, the ground beneath her opened and her favorite machine was unleashed, a construct made using the carcass of her late hobgoblin servant and repurposed titan technology: the Mecha-Oaf.

The fight thus gained a heavier atmosphere, the combined might of the oaf's reckless brute ways and the machine's core power granting it incredible abilities, but also due to the fact that Lance, still holding his deep, bleeding, wound with his hand, was beginning to progressively lose consciousness due to his wound and Nethaniyel incapacitated from the headshot. Sahla attempted to leap over the oaf in order to find a way to use her gadgets to compromise its circuits, but the machine was faster and, with one of its cannon hands, blasted the pandaren right into Scumboom's office, then started spinning around while unleashing torrents of energy in an attempt to blast the remaining enemies, successfully hitting Bopalan and knocking her back while Topsail luckily managed to avoid it by hurling himself against the floor, but was unable to rise, his wounds becoming more and more difficult to handle, Leugim avoided the spinning spell wave by running around the Oaf, once the attack was done, the Grand Commander fired an explosive shell at the back of the creature, nearly hitting Creuza herself, as the machine turned around, Leugim blasted the same spot with a burst of Chi, causing the Oaf to turn around again only to find itself enveloped in a cold cloud-like ring of ice, which rapidly turned into an ice tomb, Scumboom having to leap off her machine to avoid being frozen as well, Firetorque then was swift to unleash an empowered ball of frostfire at the frozen enemy, reducing it to thick fragments of ice. With the Mecha-Oaf brought down, Creuza leapt from the corridor's window and appeared with a magnetically-enhanced hovering cabin-like machine: the Magne-Bomber.

Holes opened from both sides of the machine and missiles started flying into the corridor in order to blast the Legion, one of them exploded near Bopalan's feet and threw her against the wall while Leugim ran as fast as he could to outmaneuver the projectiles that came for him and succeeding, luckily for the nearly unconscious and grave wounded Grand Commander and the disabled Nethaniyel, none of the missiles successfully hit them, passing by harmlessly to crash against either the floor or the wall.

Leugim hurled himself in Nethaniyel's direction and carved his claws into the warlock's rotten flesh, unleashing a torrent of healing Chi mixed with the shadow magic that lingers within him directly into Blackthorn, the Forsaken warlock convulsing slightly as he rapidly rose, revitalized and purged from the touch of the Light. Santangelo said that the warlock now owed his continued existence to him, something which Nethaniyel grudginly accepted, as soon as the two Forsaken turned to face the Magne-Bomber, the machine had turned itself, aiming the cannon of its lower body to the tunnel, unleashing a massive torrent of energy against them. Bopalan ran to the Grand Commander's direction and teleported herself a few yards away from the blast and watched in horror as Lance slowly lost consciousness while Nethaniyel encased himself in a shield of fel energy that was rapidly shattered, resulting in him being hurled against the wall, though he was fast to compose himself. Leugim attempted to avoid the blast by running towards the tunnel's only passage, but when he was about to leap in order to reach it, he was blasted in the side of his ribcage, propelling himself violently against the wall and causing him to fall facefirst on the floor.

Snapping his fingers, Nethaniyel hurled a massive bolt of chaotic energies into the Magne-Bomber's cannon while it was preparing for another blast, the clash of energies from the soon-to-be energy wave and the Chaos Bolt causing the cannon to explode and the circuits of the machine to malfunction. Seizing the opportunity, Bopalan unleashed a wave of sharp shards of ice at the machine, aiming at the cracks opened by the explosion of the cannon, the successful attack causing the arcane-fueled magnetic device that allowed the machine to hover to slowly start imploding, crashing the machine against the tunnel, Creuza leapt from her control cabin and, as the bomber fell from the tunnel and exploded mid-air, the goblin attempted to deal with the Legion on foot again in a desperate attempt to finally stop them. However, she was ambushed, immobilized and then beheaded by a recovered Sahla.

While a vengeful Nethaniyel feasted upon the goblin's corpse, Leugim, Sahla and Bopalan, carrying the fainted Grand Commander in her arms, walked into the engineer's office and, to their relief, Leugim found and confiscated the Kor'kron War Shredder schematics, their mission complete. However, they weren't able to leave with the Grand Commander fatally wounded, the battlefield was on their way to escape and bringing him there could seal his fate, and Bopalan being not only wounded but too exhausted unabled the Legion to leave Orgrimmar via portal.

The Legion suddenly heard faint grunts and desperate gasps for air coming from a bundle of crates in the corner of the room, when Leugim shattered them, it revealed humans, the cages in which they were trapped also being destroyed by the Overseer's attack, allowing the pinkskins to roam freely around the room, until they noticed the Horde races ahead of them. Tensions between the Legion and the group of prisoners grew fast as they engaged in a heated argument with Leugim and Nethaniyel, however, the combined efforts of Sahla and the mysterious female plated woman managed to avert further conflict, the two sides agreeing that, since they both wished to fight their way out of the Underhold, doing so together would make things safer, thus they closed the iron door of the office as Sahla left to distract any possible loyalists that could come across the locked door and spent the rest of the night in there in order to recover themselves from their wounds a bit. During the argument, however, one of the human soldiers asked the woman since when was she a leader among them, which promptly answered that she was merely the voice of reason they didn't have at that situation, but what caught Leugim and Nethaniyel by surprise was the name used by the soldier to speak to the woman: Santangelo.

As soon as the humans finished improvising beds using pieces of the cages and crates they were put into, they rapidly hopped over them and slept minutes later, followed by Bopalan, who laid to her Grand Commander and mate's side. Leugim and the mysterious armored human woman exchanged a few curious stares for some while before she finally fell asleep.

During the late night, Leugim was questioned by Nethaniyel if he knew who that woman was, since he thought it had an influence on the Overseer accepting the temporary truce with the Alliance, something which Leugim strongly denied, as he truly believed it to be a coincidence, making a discreet mental note that the woman did seem familiar.

Retrieved from "https://leugim.fandom.com/wiki/Siege_of_Orgrimmar?oldid=5235"
Community content is available under CC-BY-SA unless otherwise noted.